Why Do We Worry? About Risk, The Future, & Fear of the Unknown 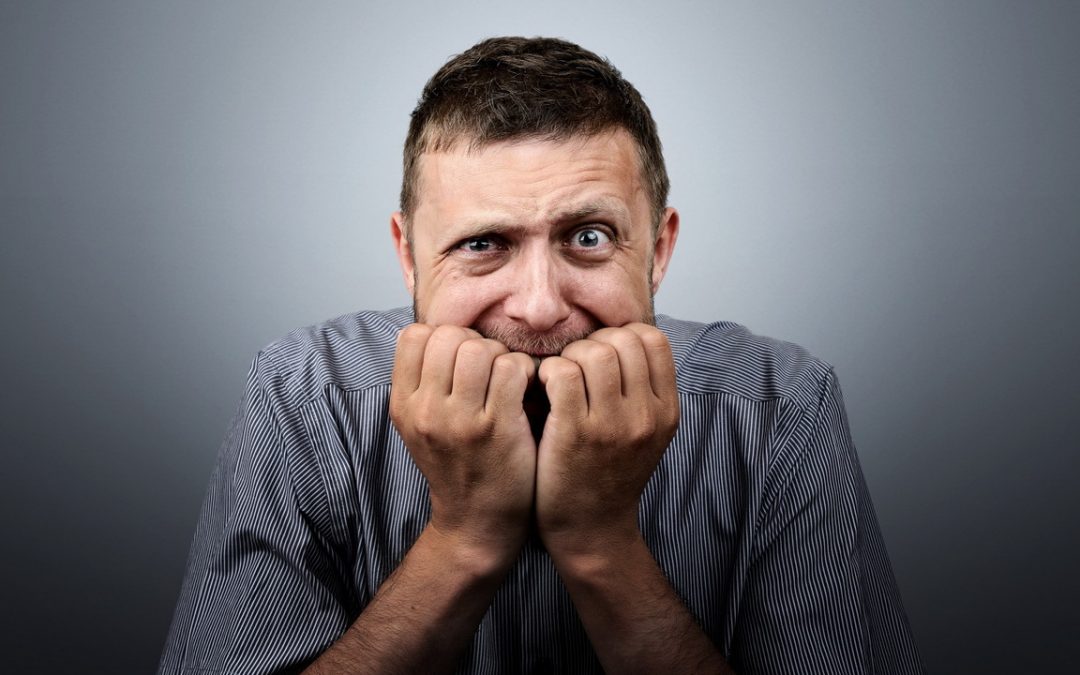 Believe it or not, in our modern life, the most common fear is the fear of the future. Fear of things that might happen, but yet, might not. Fear which, at times, can become so intense that it may even completely paralyze people and keep them trapped in their routine patterns.

However, as frightening as future events may sometimes seem. It’s imperative to remember that we never really know for sure what the future may bring. All of our worries are based on nothing more than our assumptions, thoughts, and beliefs, and these are very rarely accurate.

The good news is, that since our worry is only a product of our own perception, it is also under our control. And when used right, worry can become our dearest advisor and help us make better decisions than ever before.

The Evolutionary Purpose of Worries

As we go through our lives, one of the most important things we learn about the world is how to avoid danger. Knowing what’s bad for us can help us avoid upcoming threats and save ourselves some unnecessary pain.

Throughout human history, being worried was definitely one of the most important skills a person, or any creature for that matter, could possess. Things like knowing to fear a pile of leaves because there might be a killer snake underneath, or knowing to fear a swamp because there might be killer alligators lurking on the bottom can dramatically increase one’s survivability.

Inside each of our brains, there’s a system that never rests. A sub-conscious system that constantly goes over everything we know and uses that to anticipate all possible future threats and risk factors. While every time this system encounters something risky, it sends a notification to the rest of the brain. These risk notifications are what we feel and perceive as worry. It’s an emotion that feels much like fear, only it isn’t based on our current experience, but instead, on our knowledge regarding future possibilities.

This special ability to make ourselves afraid of things that are seemingly safe has been doing a great job keeping us from harm’s way, and due to that, I really do believe that we should take a minute to appreciate this valuable emotion. However, being afraid of things that don’t seem to be scary isn’t always the best response. Especially in this day and age, when there just aren’t as many deadly animals lurking in the shadows, worries often become excessive and inappropriate. Keeping us from things that not only aren’t deadly but often aren’t even dangerous at all.

When looking at our species in a wider perspective, it becomes why we, as humans, are inclined to worry. If survival means being worried, and our ancestors are those who survived, then we must be the descendants of the biggest worriers that have ever walked the earth.

If you’re a living human, you must also have a knack for worries. And in this world, which even though it might not feel like it, is actually factually much safer than ever before, this innate talent for worries may be misguided and often overused.

In this day and age, as our worries desperately try to remain relevant and helpful, they seem to have reinvented themselves. In the modern world, instead of alerting us about survival threats, they seem to alert us about almost everything. We see risk everywhere we look, and that brings to our lives a large amount of fear that wasn’t there before, and in many cases shouldn’t have been there at all.

Right after Adam and Eve took a bite from the forbidden fruit and received the knowledge of good and evil, they immediately started to worry about their looks, their nudity, and the different ways God might punish them.
This kind of safety, the knowledge of evil, comes with a great price. It may keep you safe, but it also quite literally takes you from your blissful perfect and safe current experience into a hellish world, full of dangers and fear. A world full of possible negative outcomes.

The more we know about possible evils, the more we have to worry about, and the darker this world feels to us. In the name of survival, we’ve lost the heavens.

The most important thing to remember about worry is that even though it might really feel like it’s an objective truth, and even though you completely believe in it (after all, it was based on your beliefs), it’s not always true. In fact, our worries are hardly ever accurate, and very often they even end up being dead wrong.

Your emotions are always true, but they are not always right.

Worry is not a response to the objective reality, nor it could be. Instead, it is only a response to our own internal, personal, and subjective perception. It is a reaction to possible future events, as we believe they will probably be. And since these have yet to happen, our worries are based solely on our own assumptions. Nothing more.

Therefore, it’s up to us, as conscious beings, to continuously assess and evaluate our own beliefs about the world, and continuously calibrate our perception, as well as our worries, to fit with reality.

Once our internal model of the world is accurate enough, our worries will be able to make more accurate predictions and only alert us at the right time, and in the right amount. Until then, you can use the following patterns to find out where does your belief system stand in relation to reality, and what should you do to get the most out of your internal mental system of future prediction, risk assessment, and worries. 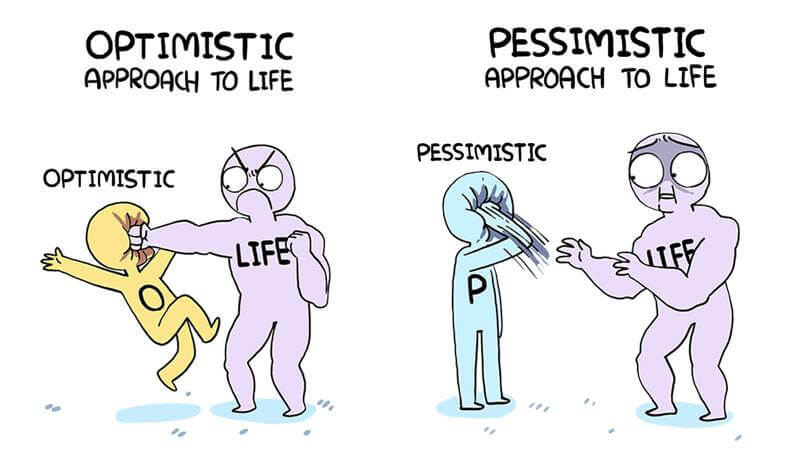 Optimism and Pessimism By owlturd.com

The first type of future prediction error I would like to address is the false positive error – commonly known as pessimism.

Pessimism is a term we use to describe people who, under conditions of uncertainty, tend to make awfully gloomy assumptions and predictions. Pessimists often overestimate the probability of negative events, which makes them perceive the future as more threatening and dangerous than it actually is. Consciously, or unconsciously, filling in any missing knowledge with negative assumptions that, if allowed to, will later be proven to be exaggerated and overly negative.

People holding to a pessimistic belief system tend to feel excessively worried. However, since they are always prepared for the worst, they hardly ever feel disappointed.

On the other side of the pendulum, we find the optimists. First, let me just clarify and say that by optimist I don’t mean a person with a positive and cheerful approach to life, but a person who tends to assume that the future will be more positive than it actually is.

It’s important to remember that people can fake it, and many of the super positive so-called optimists we tend to come across are actually pessimists in disguise. Since being negative all the time can make a person pretty hard to be around, these pessimists decided to make a change in their mood, but without changing any of their core beliefs. They still hold an overly negative world-view, but they make a conscious effort to appear positive and cheerful about it. But, if a person believes the worst of people, and fears the unknown, doing it with a smile it doesn’t actually make them any less of a pessimist.

True optimists, however, do enjoy a reduced level of worries and a much more positive and carefree experience in their day-to-day lives, but not without a cost.
The overly optimist is usually unaware of risk factors and unprepared to meet life’s challenges, which, in turn, causes them to often be surprised by the future, fail more frequently, and feel disappointment much more than they should.

Since optimists are often unaware of risks, they have a certain gullibility to them which makes them easy to lie to and take advantage of. That often makes them mix with people who really aren’t good for them. Which, under healthy circumstances, should act to regain the cosmic balance, and make them more suspicious and negative, and slightly less optimistic.

One should never fake reality in any manner.

As both strategies prove to be maladaptive and difficult to maintain, in this case as well, we find ourselves looking for the middle path.

What comes between optimism and pessimism you may ask?

That would be realism.

If we were to take our mental health seriously and address it with the expertise and dedication of a superhero scientist, we would make our best effort to minimize all kinds of false predictions, both positive and negative.
Just like we don’t want to see things as brighter or darker, but we simply want to see things as they are. We should not aspire to feel better, nor less bad, but simply to feel accurately. Be fully aware of whatever is happening, whether it’s good or bad, with the greatest precision possible. And that, miraculously, (or not) is also the way to minimize overall negative emotions.

Imagine that your worries would only be triggered when something bad is actually about to happen, just like Spiderman’s spider sense on a good day. Imagine that you would never be disappointed by an outcome, but you’d also never make the mistake of expecting things to be worse than they actually are. Imagine what would it be like if your assumptions and expectations were always on point.

This is what optimal emotional management looks like. Knowing how to make use of all of our emotions. Each of them in the time and place it was designed to. Treating them all as equals, without discriminating or manipulating them. Simply allowing emotions to do what they were designed to do.

When it comes to worries, much like any other emotion, balance is the optimal strategy.  If danger is indeed lurking, it’s best to know, worry, and prepare. But when the future is safe, it is best to remain calm and carefree.

Optimize Your Belief-System to Minimizes Worries

I know… This definitely doesn’t sound as attractive as positive-psychology or any of the other new-age positive trends. Especially if you already believe that the world is a dangerous place, and other people and ethnic groups are innately bad. But this is the truth. This is how it works.

To increase your EI, and live a happy life, you must see things as they truly are, and you must hold on to a belief system that correlates with reality as much as humanly possible. Even if it’s scary, even if it’s difficult, and even if it’s not fashionable.

If you’re worried about something, you can avoid it and keep yourself safe, but you don’t have to. You can also just go right through it, test your beliefs, and learn something new. Trust me, more often than not, reality will fail to match your worries.

Don’t be afraid to put your beliefs to the test. And when reality proves you wrong, don’t fight the disappointment, just adjust your beliefs to match reality. Because that is exactly how we better beliefs are born. And having an internal belief system that’s coherent with the outside world is the one true secret for mental and emotional health.

Make Stress Work For You, Not Against You!

Trapped in My Beliefs – The Link Between Emotional...
The EI View of an Existential Crisis
Make Stress Work For You, Not Against You!
Getting to know your Unconscious