What is Emotional Intelligence? 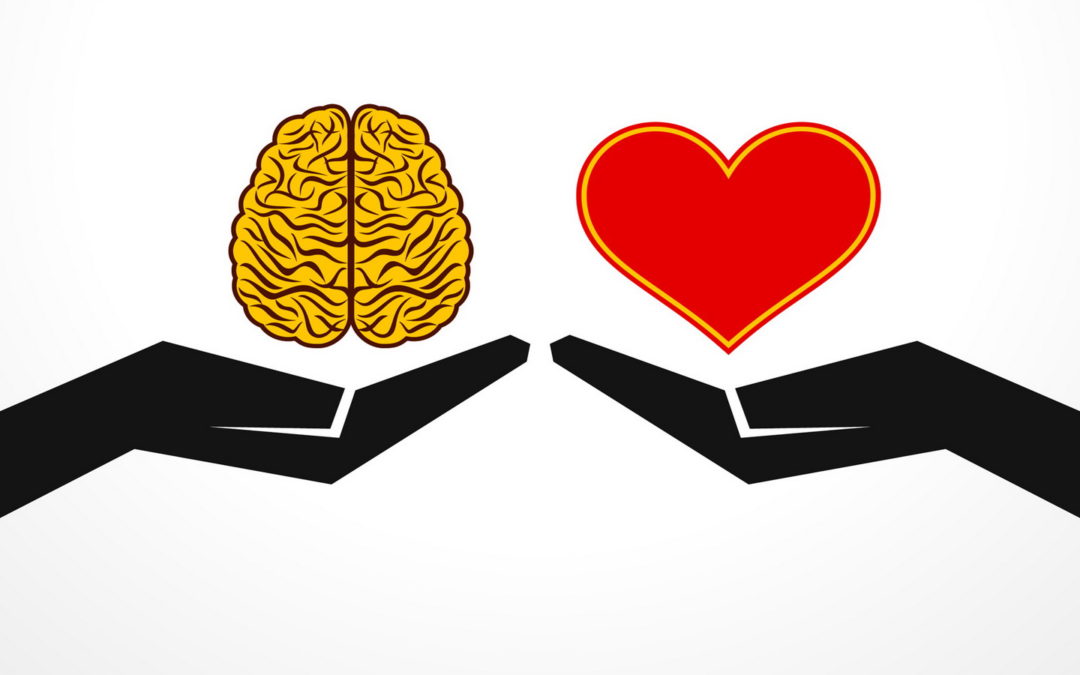 Why is Emotional Intelligence So Important?

In a nut shell, Emotional Intelligence is the ability to remain open to intense levels of both positive and negative emotions without losing control over them. It is a set of skills consisting mainly of awareness to the emotional chatter which goes on within us, the ability to understand it, locate its causes, and correctly managing them.

This skill set is beneficial in many ways, such as maintaining calmness, focus, and sense of safety in stressful and challenging situations. But most of all, these skills allow people with high emotional intelligence to maintain their higher cognitive functions and avoid slipping into lower cognitive states (i.e. fight or flight and rage) when faced with unpleasant emotions. By that, improving their overall performance in just about every field.

And the best part is, that unlike IQ, emotional intelligence can easily be learned, and improved. By learning to correctly recognize emotions and extract meaning from them, anyone can master this language and achieve full conscious control over their bodies, their reactions, and their lives.

To truly understand the meaning of the term Emotional Intelligence, we must first understand the structure of the mind, or should I say minds. At whichever discipline we look, we can always see a clear distinction between two major parts of the mind – one conscious and one unconscious.

The conscious mind, which we also like to call the intelligent mind, is the part of the mind that is in charge of our higher mental functions. That being language, speech, planning, decision making, abstract thinking, and more. This part is you, the one who’s reading these words right now, thinks and reasons about what was said, judges it, and decides what to do with it.

Even though these two are always together, they are very different in nature. The intelligent mind starts off as a clean slate. It learns very fast and soaks up information like a sponge. While our emotional mind doesn’t learn, but it slowly evolves. When we’re born it is already imprinted with certain programs, patterns, and behaviors. Many of which can’t be changed within our lifetime.

Since they are so different, even though these two parts of ourselves live together, they often don’t get along very well and fail to work together. Causing their owners to become fragmented, unstable, and spend much of their time pulling in opposite directions and effectively work against themselves.

The Challenges of Quantifying Mental Abilities

IQ (Intelligence Quotient) is a term coined by the German psychologist William Stern just a little over 100 years ago. It is used as a measurement of a person’s conscious, intelligent, mind and still serves us today as the leading measurement of human intelligence. Though it does have one major drawback.

The problem with the IQ score is that it doesn’t actually mean much. We’d expect that people with a high IQ score would be more successful in life and reach an overall higher level of satisfaction and wellbeing, but this just isn’t the case. As a matter of fact, a person’s IQ score fails to predict any of these factors. When really looking into that we find out that the intelligent mind’s capability doesn’t affect one’s performance level, or the quality of life nearly as much as we like to believe.

Due to that, to get a more reliable measurement of one’s abilities and potential, we must measure their entire mind – conscious as well as unconscious. Which is quite a challenge, considering that fact that the unconscious is completely inaccessible to us.

We define emotional intelligence as the ability to reason with emotion.

The Birth of Emotional Intelligence

This is where John Mayer and Peter Salovey came to our assistance. In 1990, Salovey and Mayer came up with a new method for measuring a wider range of mental functions. This method received the name Emotional Intelligence (aka EI or EQ), and though it can’t quite measure the unconscious, it allows us to measure the quality of the relationship between the intelligent conscious mind and the emotional unconscious mind.

This measurement relies on 4 key elements which are: 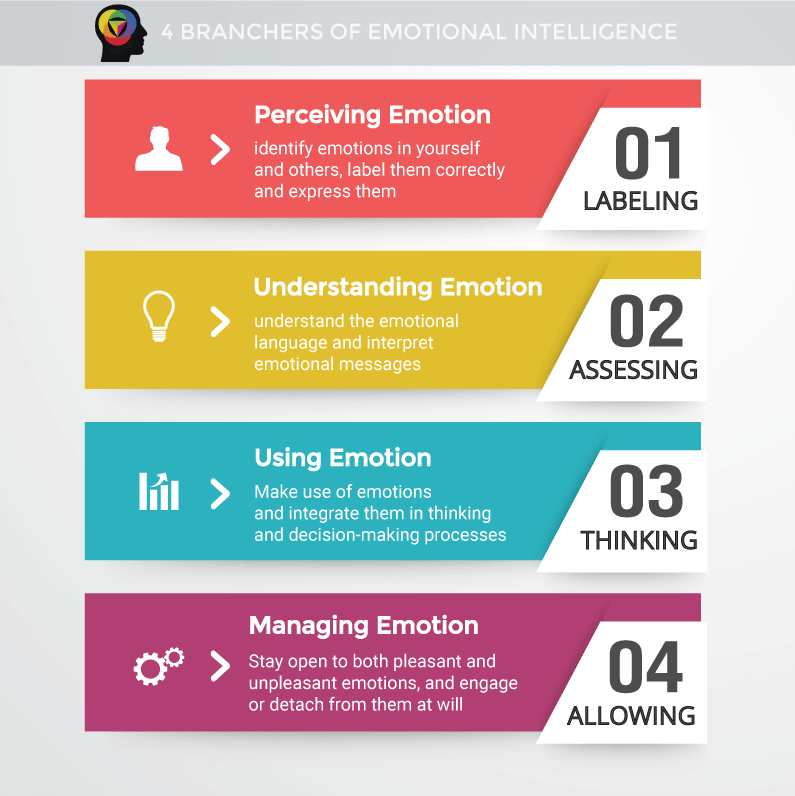 What is Emotional Intelligence Good For?

Unlike IQ, EQ has proven itself to be much more accurate in predicting people’s overall level of performance and success in life. Nowadays, when applying for a job, emotional intelligence is a required skill. HR professionals place a great emphasis on candidate’s EQ skills, assessing the level of communication, empathy, teamwork and their ability to make decisions under stressful conditions. A survey conducted in 2011 by CareerBuilder found that 59% of employers would not hire a candidate with a high IQ but a low EQ, and 75% said they’re more likely to promote workers with a higher EQ score.

Various other researches show that people with a higher EQ are generally more successful in life. They experience lower stress levels, have increased confidence and self-esteem, communicate more clearly, show more compassion to others, and enjoy in more meaningful relationships. Making Emotional Intelligence a valuable skill not just for work, but a critical skill for a good life.

In my personal opinion, the most valuable thing about increasing your level of emotional intelligence is the ability to make good decisions. Increasing your awareness to your own emotional state, as well as the emotional state of others, can help you better understand situations, and better react to them. In turn, helping you to make your way through life with ease and achieve your ambitions with less effort.

The second major benefit of increased emotional intelligence is the ability to stay open and keep your cool in the presence of unpleasant emotions. As you learn to listen to your emotions and manage them correctly, they will no longer surprise, overwhelm, or control you. Consequently, increasing your sense of worth, self-esteem, and self-confidence.

How to Increase Your Emotional Intelligence?

The really good news is that unlike IQ, which remains quite static throughout life, EQ can be improved. By increasing your emotional awareness and strengthening the relationship between your intelligent and emotional mind, you can learn how to better manage your internal self. Different sections of this website will help you learn more about emotions, about the conscious and unconscious mind, and about the relationship between them. So that you too can finally stop resisting yourself and enjoy the full potential of this remarkable brain you carry around.

The Simplicity of Emotions is Also Their Downfall

Our emotions are with us in each and every day of our lives. They are present from the day we’re born until the day we die, and they never rest or take a break. But it seems that since they’re always there, we never learn to appreciate them.

Since they are so fundamental to our being, we take them for granted. Schools focus on teaching children how to perceive the world in terms of language and math, but yet, offer no type of emotional education. We’re all expected to figure out how to handle emotions on our own, and due to that, almost none of us really know how to work with them.

As we now know, emotions aren’t just useless primitive heritage from our caveman ancestors, but they are the most direct channel to the core of our being. These incredibly misunderstood signals are a primal method of communication, not only between individuals, but also between the different parts of the self. They play a crucial role in our ability to function in the world, interact with one another, and regulate our bodies and minds.

Deep inside the structures of our brain, lies another mind – an unconscious mind – but incredibly wise nonetheless. Crafted through billions of years of evolution to help us satisfy our needs, keep us safe, and make us happy. Successfully overcoming all of the challenges that life on this planet had to offer. A truly incomprehensible number of deadly tests, all leading to this point in time, when a living creature first gains the ability to understand itself.

We are still only beginning to discover the incredible power that lies behind this unconscious and so-called primitive part of ours. Though it lacks the ability to speak in language and explain itself, it is far from being useless. It has taken us all the way from the swamps to the metropolises, and for that, at least in my opinion, it deserves some respect!

Forget Everything You Know About Sadness
Guilt as Our Most Primal Sense of Morality
Escaping Your Hand-Made Cage of Anxiety
Apathy: When Feeling Becomes Too Much