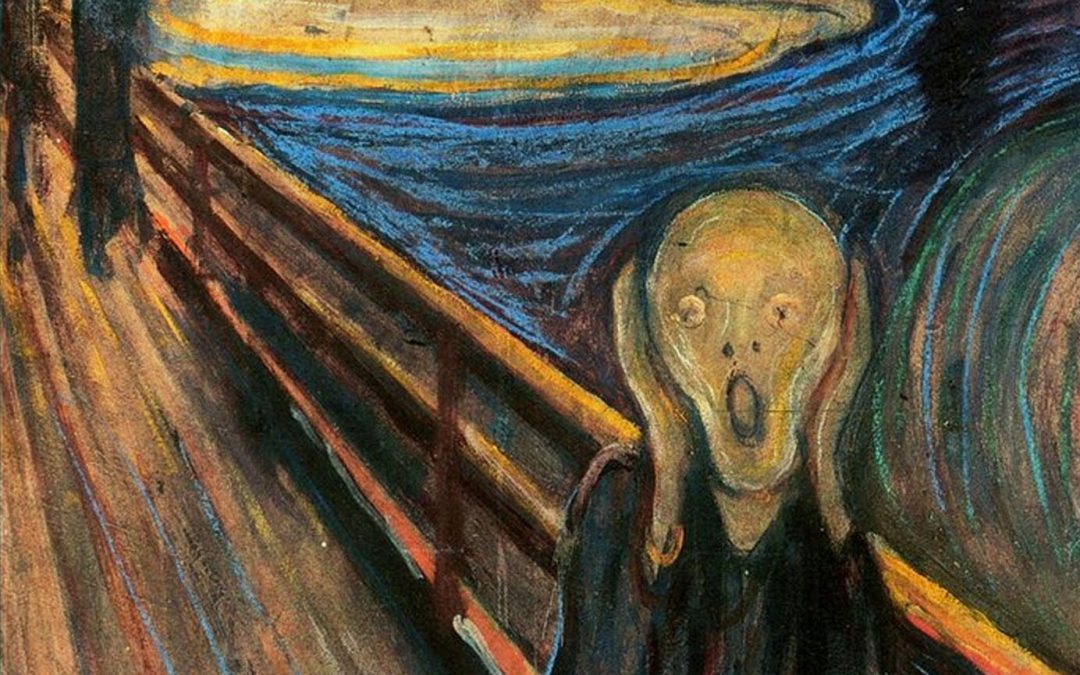 What is a Panic Attack?

A panic attack is probably one of the most frightening experiences a person can go through. It is an episode of ever-growing, unstoppable, and overwhelming fear that floods the person without any apparent cause. A panic attack involves a full activation of the sympathetic system, extreme stress levels, and with it, a complete loss of control one’s own body and mental state.

On the physical level, it may involve shortness of breath, dizziness, nausea, and intense chest pain, which often makes people mistake it with a heart attack. But in case of a panic attack, all these symptoms appear absent of any physical problem, but only because the mind got caught in a maladaptive pattern of ever-increasing fear.

This article will take you through the mental pattern which eventually expresses itself as a panic attack. Exposing the individual thoughts, decisions, and state of mind which contribute to the creation of this dreadful psychological condition. As well as offer a set of tools to help you, or the people you know, to successfully deal with and relieve panic attacks.

The Cause of Panic

In this neural pattern, two different emotions send conflicting messages to the brain and body. One, fear, recognizes a state of danger and sends a signal which says “flee”. While the other, worry, recognizes a possibility of future danger and undesired consequences and sends a signal which says “stay put”. When trapped in such a conflicting mental pattern, in whichever direction you try to go, the level of arousal, tension, and fear will only increase.

Our emotions aren’t always coherent, and we all encounter such states of emotional incongruence throughout our lives. Usually, these can be consciously addressed and reconciled. However, under certain conditions, conscious reconciliation isn’t possible, and these two contradicting impulses leave a person paralyzed and incapable of finding relief. Such patterns are the conditions of anxiety, and this type of anxiety is referred to as a panic attack. 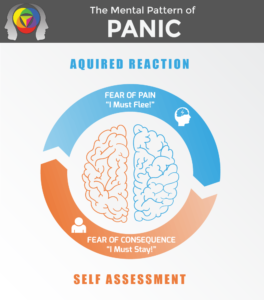 Setting the Neural Framework for Panic

Several things need to go wrong in order to make an emotional incongruence transform into a full-blown panic disorder.

1. The Repression of Fear

We are all human, and due to that, we have emotions – amongst them is fear. But, for some people, experiencing fear is considered unacceptable. Perhaps they see it as a weakness, an obstacle preventing them from doing certain things, or maybe they just took it too seriously when they were told: “don’t be afraid”. Whatever the reason may be, the result is the same. After continuously rejecting the emotion time and time again, this mental operation becomes a conditioned habit.

From this point on, as soon as fear rises, the mind automatically rejects it, without even asking. It’s so each that even a child can do it, and they do! 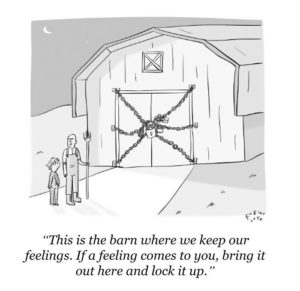 2. The Repercussions of Repression

After the mind has been trained to habitually ignore the emotion of fear, this emotion is considered repressed, and it will never bother you again… Well, at least not consciously. Once fear is being pushed aside and tucked away in some dark corner of the mind, we might not feel it, but that doesn’t mean it’s no longer there.

The big difference between feelings and emotions is that you can stop feeling afraid, but you can’t stop having fear. The emotion of fear is a sequence of bodily and mental activities which include feeling afraid, but also includes an activation of the sympathetic system, an increase of heart rate, the release of hormones, a shift in mental activity, and eventually an action which is conducted by the flight mechanism.

The feeling we can hold back and repress, but all the rest happen whether we like them to or not. In the long run, not feeling afraid doesn’t reduce fear even one bit!

That is the main problem with ignoring our internal impulses in general, and with the technique of repression specifically. Even though we have the ability to remove the awareness of an emotion (feeling), it is impossible to stop ourselves from having the emotion, or the physical reaction to it.

When in a threatening situation, whether feeling afraid or not, fear is always there. The body does what it always does, the sympathetic system will be activated, the heart rate will still increase, and the amygdala (primal brain structure) will still hijack the brain. The only difference is that after repressing the feeling of fear, the person won’t know what is happening or why.

Worse than that, absent the awareness of their current emotion, people might end up acting in ways which increase their fear instead of reducing it. Pushing themselves to do things which they would usually feel uncomfortable doing, and end up placing themselves in even more dangerous situations.

Without the awareness of what their body is currently reacting to, they would be completely incapable of acting to relieve their fear. It is this lack of intervention which allows the emotion of fear to grow stronger uncontrollably. Resulting in a full-blown physical reaction, but absent of any conscious awareness as to its cause. Leaving the person completely incapable of acting to reduce the impulse and improving their emotional state.

Panic always gets people by surprise. They don’t even know they’re afraid until suddenly, it completely overwhelms them. The body tenses up, palms begin to sweat, and the chest tightens. All they can really tell is that their body is acting afraid – It seems to be reacting to something – and that intense reaction on its own becomes a cause of great fear. But at this point, fear is no longer fear, now, it’s called panic.

This is the fertile ground on which panic grows. A mental habit that was initially meant to repress an emotion and remove it from one’s mind has unintentionally led to an uncontrollable explosion of that same emotion. Instead of making it go away, fear is now operating autonomously. Growing ever more intense in the shadow on consciousness, only sensible by observing one’s body.

This unfortunate condition happens because people fail to understand the basic characteristics of emotions. That is, that even though the awareness of them (feeling) can be removed, emotions have nowhere else to go. Emotions do their job, with or without our awareness. Silently growing within us, until we either notice them and act to relieve them or until they can no longer sit still. If ignored and not addressed in time, emotions have the complete power to hijack the body, take over the controls, and express themselves.

When push comes to shove, the primal brain always wins. Emotions can never be controlled! If anything, it is them that allow us to take control.

Experiencing a panic attack is an emotionally intense experience. It is in fact, so overwhelming that people who experienced it might find it incredibly disempowering and end up fearing their own emotions even more than before. This, unfortunately, may cause them to invest more effort into repressing their emotions, which inevitably leads to another panic attack, and eventually a chronic anxiety disorder.

Other than that, long term anxiety and panic are self-fulfilling prophecies. As in the beginning, the person attempts to remove their sense of fear because they believe it is inappropriate. Then, after they have lost all control over it, it has indeed become incredibly inappropriate.

Self-fulfilling prophecies are challenging to escape, as they require a counterintuitive solution. In this case, this solution is the re-integration of fear into one’s conscious awareness. The only way to regain control, whether we like it or not, is to reinstate the awareness of them. Take the good with the bad and stop the harmful separation and repression of unwanted urges.

Breaking the Patterns of Panic – Mindfulness

If you’re experiencing a panic attack, remember that that for some reason, if you’re aware of it or not, your primal mind has found your current situation to be threatening. In this case, even if you don’t necessarily believe it, the most important thing to do is to assure yourself that you aren’t in any danger, and help yourself regain a sense of safety. This can be achieved either physically, by leaving or breaking the current situation, or mentally, by taking deep breaths and shifting one’s focus from the mind back down to the body.

When fear arises, our breathing becomes shallow and irregular, this exercise is meant to consciously counter these effects and regain normal ‘safe’ breathing. Use this exercise to calm yourself down, and while doing it, try to reconnect with your fear. Regain awareness for the unknown reason this sensation has risen within you, while constantly reminding yourself that you’re no longer in danger and everything’s fine now.

Remember, your emotions might be scary and even painful, but they can’t hurt you. Feeling bad doesn’t put you at any risk, and you will get through this!

When experiencing panic, distance yourself from the situation and sit or lie down comfortably. Take deep, slow, full and rhythmic breaths through your nose. Breathe in deep into your lower belly and your lower back, upper belly, and then all the way up into your chest, filling your lungs to capacity.

Hold your breath for 5-10 seconds, and exhale as slowly as you can in reversed order. It helps to put one hand on your stomach and one on your chest to make sure you’re indeed breathing all the way through.

How to Diffuse Panic

The second step is the re-acceptance of your fear. This is the deal, to get rid of panic once and for all, you must take back your fear.

You are human, and so you too will feel afraid sometimes. It doesn’t mean you’re a coward and it doesn’t make you weak, fear is completely normal. It is a legitimate emotion which we all have. It exists to keep us away from things which endanger us, and its only interest is to protect us.

TEDx: The value of emotional awareness and the power breathing has on your body

A Fit Of Rage

Repression is Actually a Tool For Self-Sabotage
Emotional First Aid – A Quick Guide
The Real Reason We Feel Embarrassed
The Negative Correlation Between Ambition and Self...