First, allow me to welcome you to the Emotional Intelligence Project. On this website, I will be sharing my insights from my own mind-hacking project. I don’t consider myself to be a hacker, but yet, in this situation, I guess I am.

It might surprise you a bit, but I didn’t hack the mind to make it more productive, earn more money, or have better luck with women. I actually had no intention to exploit it in any way. My only intention in hacking the mind was to debug it. I dove in heads first and messed around with every tiny little part of it just to make it work better, faster, and more efficiently. And as it later turned out, emotions were the key.

I’m sure everyone could use some good mental debugging, but in my case, things were messier than usual.

As a child, I was diagnosed with dyslexia, ADHD, OCD, mild Tourette syndrome, depression, and various other “emotional disorders”. What this basically means is that my therapist got so lost in my head that they couldn’t even name things anymore.

They tried to medicate me, but due to the wide diversity of various somewhat vague conditions, it was impossible to find something that works well. After about 3 years of experimenting with different “medications” and going through a wide range of side-effects, my family and I finally had enough. We gave up on the psychiatric system and stopped trying.

Medication didn’t work for me, and I can’t really say that these years of therapy did much difference either, but one good thing definitely happened – I found my passion. I was amazed by my therapists’ ability to peek into the mind and move things around. I wanted to do that too! So, I played along. I kept going to therapy and observe. Trying to figure out what were they doing, what were they looking for, and why. That’s how I fell in love with psychology, which later on I also studied thoroughly, both on my own and in university.

But I’m not a single passion kind of guy. I’m a Gemini. A mixture of opposites. And, believe it or not, my second passion is computers. Which was far easier to find. Well, as you might have guessed, for a kid with so many disorders, being social is quite a challenge. But luckily for me, computers don’t care about all that. So, my computer and I quickly became best friends.

The computer was very accepting of me and my little quirks. It didn’t get angry when I wasn’t listening, it didn’t reject me when I got angry, and it automatically corrected all of my typos without ever embarrassing me for any of them. And most importantly of all, it was predictable. Unlike people, even as a troubled child, I had no problem anticipating its reactions and usually had a good idea of what’s going to happen and why. Our interaction was very predictable, and that gave me a sense of stability which I couldn’t get anywhere else. Luckily for me, later in life, my faithful friend also proved to be a very wise career path.

Though little I knew back then, that my two seemingly opposing passions, computers and psychology, will eventually become one and the same.

Slowly, I managed to get my life on track, and I was even surprisingly successful at it. By the age of 27, I had my own software company and reached the point of financial stability. But yet, I wasn’t happy. I mean, I wasn’t depressed in the sense that I hated my life so much that I just couldn’t get out of bed. I was extremely productive, and successful at what I do, but I definitely wasn’t excited about waking up. Even with good education, a good job, and a decent amount of money, I still didn’t quite like my life, nor myself.

I felt like I hit a wall. As hard as I was pushing, and as much as I was improving, happiness just didn’t seem to get any closer.

Soon after, at the age of 28, I decided to leave everything behind and go on a journey of self-discovery. I broke up with my girlfriend, terminated the apartment lease, shut down the company, and left my old self behind. I moved to a little island in a cheap south Asian country and started working on my self full-time.

Happened that even on this endeavor, I happen to be exceptionally lucky. Within the first 3 months, I’ve found my happiness, I found my twin flame/soulmate/love of my life, and even somewhat found myself. Together, we lived on that beautiful tropical island for a few more years. Getting to better know each other, our selves, and everything in between.

Today, I’m balanced, focused, social, and I can even write. Not only that I no longer suffer from any disorders, but I even have a hard time convincing people that I ever did.

From the special connection my wife and I share, and the intense work we did together to sort out all of our quirks and glitches, an immense amount of knowledge was born. Techniques, methods, and incredibly deep understanding of what we are, how we work, and why we do the things we do. Insights which we would like to share with you and others. This project and this website are one of our ways to do so.

I know, these things I write about here fall far from the status-quo and probably go against many of the things you currently believe. It might be controversial, and often difficult and uncomfortable. But, if there’s one thing I can vouch for is that unlike the status-quo, everything on this website actually works! So, I hope that you can open your mind and let something new come in. I’m not asking for a commitment. You can always go back. All I ask for is that you to try it out.

Give it a chance, because as weird as it might sometimes sound, it does work.

So, now that you’ve made your way this far down the article, let me try to help you with the original question.

“Who am I?” is probably the most fundamental question one can ever ask. But yet, it is one that, historically speaking, only a handful of people ever got an answer for.

This is quite a simple and straight forward question. Isn’t it?! You’d think that everyone should know the answer, but yet, it seems to somehow elude almost all of us, almost all of the time.

Let me try to explain how something can be so simple, and yet, so difficult to answer.

To address the question of who am I, I’d suggest the method of elimination. (I should probably credit Ramana Maharshi for that) 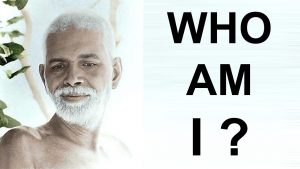 First, think if the entirety of what you think you are, and from there, start stripping away anything that you can. Making your way down to the core.

You know… you’re not your job, not your bank account, not your khakis and all that…

After a while, you’d end up with the bare minimum, and that’s when things start to get interesting. Because of course, after all of our ideas and definitions of the self are stripped away, we are all the same. We’re just this undefined something that keeps asking “who am I”.

In the beginning, we use our voice to ask the question. And since we can use voice, then the voice is ours, but not us. So, you strip the voice away and ask again. This time, without using your voice.

Even without voice, you are still there, and you’re still asking a question. But you’re using language to ask the question.

Since language is a tool you’re using, language isn’t you. So, you must ask again. This time, without language.

At this point things get tricky. Surprisingly (or not), many people seem to believe that all thoughts use language, but nothing’s further from the truth. Thoughts can also be visual, or emotional.

This step might seem weird and take a while to accomplish, but if you think this is weird, just wait for the next step.

Once you managed to wrap your head around asking a question without the use of language. Now, all that’s left is you, using a thought to ask a question. But, since you’re using a thought, the thought is not you. So, there’s still one more thing you must strip away if you want to find the answer. You need to ask the question, but without words, and without a thought.

This is indeed tricky, but I can promise you not only that it’s possible, but you already know how to do that. Once, when you were a newborn, that was actually the only way you could ask anything. All you need is to do that again.

And then, once you manage to do that. Once you ask the question just like a newborn would ask, something miraculous happens, and you actually get an answer. There’s this deeply hidden layer of the self that understands no language and no thought, but now, it can understand you, and it will answer.

I’m truly sorry for the anticlimactic ending. There’s nothing I want more than to tell you the answer. But, as you might have already guessed – like the question, the answer also has no words. The answer is an experience, it is an emotion – the deepest and most fundamental of human emotions. It is something that can’t be told or communicated, but it’s something that we can all know if we just ask in the right way.

The Game of Shame: The Pain of Pretending
The Real Reason We Feel Embarrassed
Why Do We Worry? About Risk, The Future, & Fe...
A Fit of Rage: When You Just Can’t Take Any ...